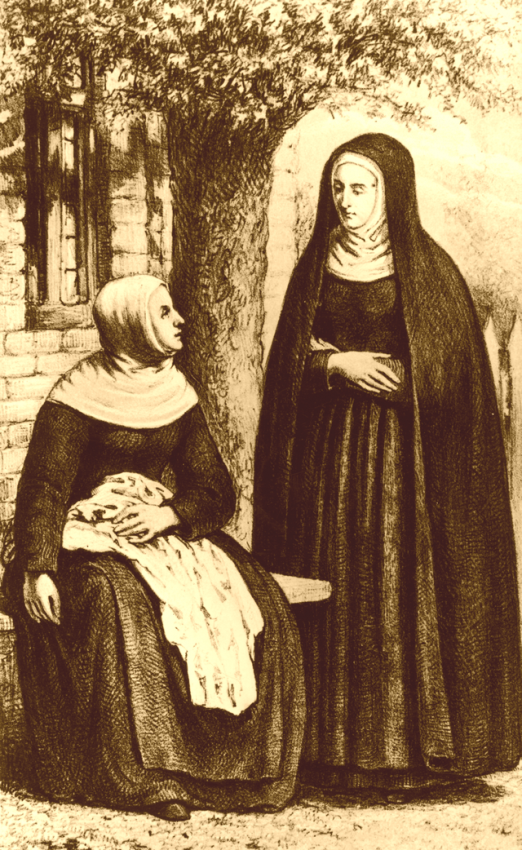 St. Hildegard’s feminine strength and authority, combined with her intellectual talents and mystical gifts, allowed her to be a courageous and outspoken presence to the Church leaders and political figures of her time. Hildegard was born in the year 1098 to a noble German family as the youngest of ten children. She was gifted at a young age with visions, although she initially did not understand their meaning. As a child, Hildegard was sent to be educated at a Benedictine monastery, where she was put under the care of a woman named Jutta, who taught her how to read, write, and pray the Psalms. The reputation for holiness that Jutta and Hildegard received spread and attracted other young women to them. As a result, they formed their own Benedictine convent and Hildegard received the religious habit at the age of fifteen.

After Jutta’s death, Hildegard was appointed as the superior of the convent and moved it to a location independent of the nearby dominating Benedictine monastery, overcoming the opposition of the abbot and monks. Her exercise of the ministry of authority inspired the sisters in her community and utilized her many organizational, cultural, and spiritual gifts. The visions that Hildegard experienced as a child continued, and she confided them to a monk named Volmar, who encouraged her to record her mystical experiences. These were later compiled into her works Scivias (“Know the Ways”), Liber Vitae Meritorum (“Book of the Rewards of Life”), and Liber Divinorum Operum (“Book of Divine Works”). The content of Hildegard’s mystical visions were primarily theological and referred to the events of salvation history, communicated to her in poetic and symbolic language.

Hildegard wrote extensively, even more than most scholars of her time, and her interests were varied and expansive. Her writings include the subjects of botany, cosmology, natural science, language, medicine, theology, music, poetry, and history. Her musical talent led her to compose hymns, antiphons, and songs that were joyfully performed in the monasteries. Hildegard had a great love for God’s creation, the pinnacle of which is the human person. She wrote, “A human being is a vessel that God has built for himself and filled with his inspiration so that his works are perfected in it.”

Hildegard was unafraid to confront the political and Church leaders of her time, and had a wide correspondence with many of them. When the Emperor Frederic Barbarossa caused a schism in the Church through his support of three anti-popes, Hildegard was inspired by her visions to write him these words spoken by God: “You will be sorry for this wicked conduct of the godless who despise me! Listen, O King, if you wish to live! Otherwise my sword will pierce you!” In the later years of her life, despite her advanced age and difficult traveling conditions, Hildegard journeyed throughout Europe to speak and share her spiritual insights. She especially addressed monastic communities and the clergy, calling them to a life of repentance and conversion and reprimanding them when necessary.

In the last year of her life, Hildegard permitted a nobleman who had been excommunicated to be buried at the convent, as she believed that he been reconciled to the Church before his death through the reception of the last sacraments. This resulted in her own excommunication, along with the rest of her convent, and the sisters were forbidden to receive Holy Communion or to sing. Hildegard appealed to higher church authorities and the interdict was finally lifted shortly before her death in 1179. Hildegard was canonized and declared a Doctor of the Church in 2012 by Pope Benedict XVI who said, “Let us always invoke the Holy Spirit, so that he may inspire in the Church holy and courageous women like St. Hildegard of Bingen, who, developing the gifts they have received from God, make their own special and valuable contribution to the spiritual development of our communities and of the Church in our time.”